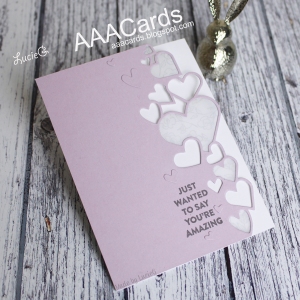 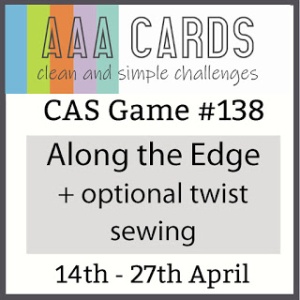 It’s time for a new challenge at AAA Cards! The theme for this fortnight is ‘along the edge’ with the optional twist of sewing. Our sponsor is Stamplorations.

I had originally planned to use one of my pretty edge punches that I have been keeping hold of for the past decade. Although I happily moved to wafer-thin dies some time ago, I have never been able to part with my punch collection. I think it’s because I invested so much in them at the time. I remember how difficult it was for us in the UK to get hold of those Martha Stewart punches when they first came out…. and how I used to love looking at them in person whenever I went to craft stores in the US.

Yes. Well, that’s a nice memory…. because I very quickly remembered WHY I was so happy to move to wafer-thin dies.

Punches are a complete nightmare with thicker cardstock. I really tried with one beautiful edge punch which got stuck on multiple occasions… and accidentally fell into the bin at one point. I fished it out.. but it’s fair to say that my romantic memory of punches has been eroded and quite a few punches will be finding their way out of my house imminently!

So I turned to my die collection – lots of choice there and requiring MUCH less elbow grease! I chose the Cascading Hearts die from Technique Tuesday. I didn’t want to fill in all the hearts as I liked seeing the white of the back of the card through the open hearts. Instead I added some patterned vellum to just a few of them.

The sentiment is from Simon Says Stamp.

This site uses Akismet to reduce spam. Learn how your comment data is processed.

I'm Lucie and I use this space to share my handmade cards which I also enter into challenges.